Last weekend my nine-year-old son and I went to the movies and saw Jurassic World, the fourth film in the Jurassic Park series (but really, a direct sequel to the original film). I was fifteen when I saw Jurassic Park in 1993, and became dino-obsessed. I devoured books and articles about paleontology. Reading about dinosaurs led to reading about evolution in general, and then to Darwin (and the rest is history, as they say). So while my son has seen the other films, I was excited to take him to see this new offering on the big screen. We loved it! The film was exactly what big movie theaters are for: suspenseful action in imagined worlds. 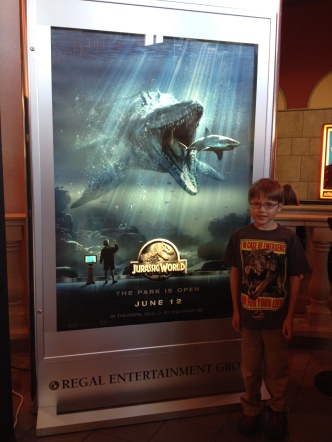 We enjoyed the film immensely despite its major drawback. As many paleontologists have shared since the movie’s trailers started appearing, Jurassic World does not do what Jurassic Park did in 1993: to share with the public the latest vision of what dinosaurs looked like (click here for a bunch of links to posts/articles from paleontologists on JW). In the twenty years since, a lot has changed; most notably, that many dinosaurs had feathers or feather-like structures. Not in Jurassic World. Even some representations of dinosaurs in the new film ignore how the other films got it right (the posture of Stegosaurus, for example). The new film also does not introduce film-goers to the wide variety of new species discovered in the last couple of decades, instead sticking with the familiar: Tyrannosaurus rex, Apatosaurus, Triceratops, and Velociraptor.

We are introduced to a new dinosaur, however. Not a real species that paleontologists have found the bones of, but a genetically-engineered monstrosity that comprises the DNA of several dinosaurs and other critters. The carnivorous and unstoppable Indominus rex is the film’s antagonist. While her presence on screen is exciting, it’s disappointing that the film’s creators felt the need to invent a new dinosaur – “probably not a good idea” – when the annals of paleontology are full of awesome theropods that could have been amazing on-screen additions to the story.

I hope the new film will inspire a new generation of dinosaur fans, and that many of these young paleontologists will seek out reading material to satiate their curiosity, and in the process, learn a little about what dinosaurs really looked like and how they behaved. For those interested in carnivorous dinosaurs (theropods), I recommend a new book by dinosaur writer Brian Switek and beautifully illustrated by paleoartist Julius Csotonyi. In Prehistoric Predators (Kennebunkport, ME: Cider Mill Press, 2015, 104 pp.), Switek profiles and Csotonyi brings to life over 40 dinosaurs and other animals from the past that dined on the flesh of other creatures. Old favorites are here, such as Allosaurus, but the book offers a look at a variety of lesser-known or more recently discovered species, including many with feathers or feather-like structures and some flying reptiles. There is Cryolophosaurus, the Antarctic theropod with an Elvis-like head crest, and the early tyrannosaur Guanlong. Ever heard of Eocarcharia? How about Deltadromeus? Why create a fictional dinosaur when nature had so many to choose from?

The profiles are arranged chronologically, starting with the Permian Period (and thus predators that pre-date dinosaurs) and into the Mesozoic Era and its trio of periods, Triassic, Jurassic, and Cretaceous, as well some marine reptiles and land mammals in the Cenozoic. The book lacks, however, some of the diversity of marine reptiles during the age of dinosaurs (there are no species of mosasaur or plesiosaur, for example). But for each entry, nothing is better than Csotonyi’s realistic renderings full of color, behavior, and feathers. The book also features a textured cover, with the sensation of touching dinosaur skin. The Jurassic Park series will never likely yield dinosaur depictions with feathers, but let’s hope in the near future that a studio green lights a dinosaur film that will. For now, enjoy Jurassic World for what it is, a science fiction movie, and check out some books, like Prehistoric Predators, and visit a local natural history museum, to learn more about the actual science.

Want more dinosaurs? The publisher of Prehistoric Predators has another book worth checking out. The whole dinosaur kingdom is featured in Discovering Dinosaurs (2014), by Bob Walters and Tess Kissinger. More encyclopedic, this volume is chock full of dino diversity. Great information and great art from a classic dinosaur artist.