A recently published book of possible interest to followers here is Creatures of Cain: The Hunt for Human Nature in Cold War America by Erika Milam (Princeton University Press, 2019): 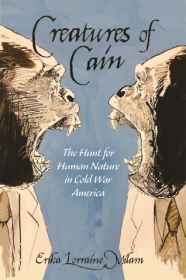 Publisher’s description After World War II, the question of how to define a universal human nature took on new urgency. Creatures of Cain charts the rise and precipitous fall in Cold War America of a theory that attributed man’s evolutionary success to his unique capacity for murder. Drawing on a wealth of archival materials and in-depth interviews, Erika Lorraine Milam reveals how the scientists who advanced this “killer ape” theory capitalized on an expanding postwar market in intellectual paperbacks and widespread faith in the power of science to solve humanity’s problems, even to answer the most fundamental questions of human identity. The killer ape theory spread quickly from colloquial science publications to late-night television, classrooms, political debates, and Hollywood films. Behind the scenes, however, scientists were sharply divided, their disagreements centering squarely on questions of race and gender. Then, in the 1970s, the theory unraveled altogether when primatologists discovered that chimpanzees also kill members of their own species. While the discovery brought an end to definitions of human exceptionalism delineated by violence, Milam shows how some evolutionists began to argue for a shared chimpanzee-human history of aggression even as other scientists discredited such theories as sloppy popularizations. A wide-ranging account of a compelling episode in American science, Creatures of Cain argues that the legacy of the killer ape persists today in the conviction that science can resolve the essential dilemmas of human nature.

Milam was interviewed about her research on the podcast Time to Eat the Dogs, and she wrote an essay for Aeon based on her book.

Yesterday, March 30, was the publication date for the paperback edition of Jim Ottaviani and Leland Myrick’s acclaimed graphic novel about the life and science of theoretical physicist Richard Feynman, simply titled Feynman. Ottaviani has written other graphic novel about scientists (such as Bone Sharps, Cowboys, and Thunder Lizards: A Tale of Edward Drinker Cope, Othniel Charles Marsh, and the Gilded Age of Paleontology and T-Minus: The Race to the Moon). His latest profiles the lives of three women who changed the way the public viewed scientists, and opened windows into the lives of our closest relatives.

This is the true story of three scientists who risked their lives for research that forever changed the way we think of primates… including ourselves. Jane Goodall discovered chimpanzees using tools – a trait once thought to be unique to humans – and is now one of the world’s foremost animal rights advocates. Dian Fossey fiercely protected the mountain gorillas she studied, bringing the plight of these gentle apes to public view. Birute Galdikas moved to the Indonesian jungle to observe the elusive animal native people called “wild person in the woods.” She stayed to rehabilitate orphaned orangutans and revolutionize rainforest conservancy.

Recruited by the great anthropologist Louis Leakey, these remarkable women are responsible for some of the biggest advances in both primatology and our understanding of what it means to be human. Written by Jim Ottaviani, with art by rising comics star Maris Wicks, Primates is an inviting, immersive, and often funny look at the lives of three of the most important scientists of the twentieth century.

Primates will be published in June, but you can get a sneak peek from the publisher’s blog, here, and an exclusive excerpt from Boing Boing, here.