My friend John J. McKay, self-described “underemployed, grumpy, and aging liberal who lives in the Great Northwest” who blogs here and here, has recently published his first book on the history of how discoveries of mammoth bones (or what some people thought they were before the idea of a mammoth came about) influenced the developing science of paleontology.

Publisher’s description Today, we know that a mammoth is an extinct type of elephant that was covered with long fur and lived in the north country during the ice ages. But how do you figure out what a mammoth is if you have no concept of extinction, ice ages, or fossils? Long after the last mammoth died and was no longer part of the human diet, it still played a role in human life. Cultures around the world interpreted the remains of mammoths through the lens of their own worldview and mythology. When the ancient Greeks saw deposits of giant fossils, they knew they had discovered the battle fields where the gods had vanquished the Titans. When the Chinese discovered buried ivory, they knew they had found dragons’ teeth. But as the Age of Reason dawned, monsters and giants gave way to the scientific method. Yet the mystery of these mighty bones remained. How did Enlightenment thinkers overcome centuries of myth and misunderstanding to reconstruct an unknown animal? The journey to unravel that puzzle begins in the 1690s with the arrival of new type of ivory on the European market bearing the exotic name “mammoth.” It ends during the Napoleonic Wars with the first recovery of a frozen mammoth. The path to figuring out the mammoth was traveled by merchants, diplomats, missionaries, cranky doctors, collectors of natural wonders, Swedish POWs, Peter the Great, Ben Franklin, the inventor of hot chocolate, and even one pirate. McKay brings together dozens of original documents and illustrations, some ignored for centuries, to show how this odd assortment of characters solved the mystery of the mammoth and, in doing so, created the science of paleontology.

I am happy to see this book out, and am looking forward to reading it! In the meantime, here are some plugs/reviews online: Greg Laden’s Blog, Nature, Christian Science Monitor, Twilight Beasts blog, Richard Conniff for the Wall Street Journal (paywall), Publisher’s Weekly, and Library Journal.

Saw this on eBay recently (click on the picture to see more information). Looks like a decades-old version of John van Wyhe’sThe Darwin Experience, although from the contents list it seems to perpetuate the simple idea that Darwin traveled to the Galapagos and “Eureka!” discovered evolution.

Abstract This paper argues that, for a number of naturalists and lay commentators in the second half of the nineteenth century, evolutionary – especially Darwinian – theory gave new authority to mythical creatures. These writers drew on specific elements of evolutionary theory to assert the existence of mermaids, dragons and other fabulous beasts. But mythological creatures also performed a second, often contrapositive, argumentative function; commentators who rejected evolution regularly did so by dismissing these creatures. Such critics agreed that Darwin’s theory legitimized the mythological animal, but they employed this legitimization to undermine the theory itself.

The mermaid, in particular, was a focus of attention in this mytho-evolutionary debate, which ranged from the pages of Punch to the lecture halls of the British Association for the Advancement of Science. Crossing social boundaries and taking advantage of a range of venues, this debate arose in response to the indeterminate challenge of evolutionary theory. In its discussions of mermaids and dragons, centaurs and satyrs, this discourse helped define that challenge, construing and constructing the meanings and implications of evolutionary theory in the decades following Darwin’s publication.

The table of contents for the rest of this issue of Archives of Natural History.

The Legacy of Aldo Leopold at Britannica Blog.

Some philosophy of science at Evolving Thoughts. Parts 2 and 3.

Fundamentalists Try to Link Darwin to Hitler at the GREAT realization.

Recent posts from Darwiniana cover Gould’s dishonest legacy, Darwin and the Age of Positivism, and Evolution not same as natural selection.

“Scottish naval surgeon and naturalist who made accurate surveys of more of the Canadian Arctic coast than any other explorer, in service with the Royal navy (1807-55). During this time he was surgeon and naturalist to Sir John Franklin‘s polar expeditions (1819-22, 1825-27). On the second expeditions, he separated from Franklin to explore the coast to the Coppermine River and Great Slave Lake (1826). He conducted a search expedition (1848-49) for Franklin’s lost third Arctic expedition that had started in 1845, but was unable to find any trace of Franklin’s ships. He wrote Fauna Boreali-Americana (1829-37) which became a standard work on Arctic biology. He also wrote on ichthyology and polar exploration.”

More on Darwin’s correspondence at Core77 Design Blog and The Stanford Daily.

Some other posts/links I found interesting:

A nice piece on paleontology history at Laelaps. 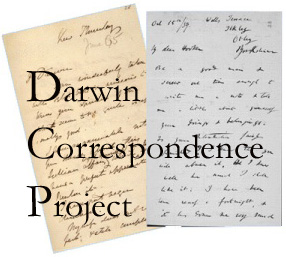