I am a few chapters into Reading the Rocks, a new book about the history of geology in the nineteenth century. I am enjoying Maddox’s writing style, and so far think this book would serve great as a good overview of the topic for those who don’t wish to delve into the much lengthier works of Martin Rudwick (that the author is much familiar with). I did spot two errors in the first chapter, which I hope is not indicative of pages to come – it’s a shame it wasn’t spotted!* 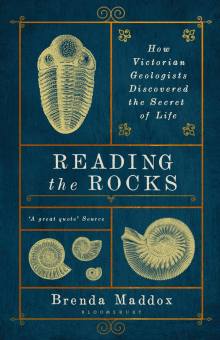 Publisher’s description The birth of geology was fostered initially by gentlemen whose wealth supported their interests, but in the nineteenth century, it was advanced by clergymen, academics, and women whose findings expanded the field. Reading the Rocks brings to life this eclectic cast of characters who brought passion, eccentricity, and towering intellect to the discovery of how Earth was formed. Geology opened a window on the planet’s ancient past. Contrary to the Book of Genesis, the rocks and fossils dug up showed that Earth was immeasurably old. Moreover, fossil evidence revealed progressive changes in life forms. It is no coincidence that Charles Darwin was a keen geologist. Acclaimed biographer and science writer Brenda Maddox’s story goes beyond William Smith, the father of English geology; Charles Lyell, the father of modern geology; and James Hutton, whose analysis of rock layers unveiled what is now called “deep time.” She also explores the lives of fossil hunter Mary Anning, the Reverend William Buckland, Darwin, and many others–their triumphs and disappointments, and the theological, philosophical, and scientific debates their findings provoked. Reading the Rocks illustrates in absorbing and revelatory details how this group of early geologists changed irrevocably our understanding of the world.

1 thought on “BOOK: Reading the Rocks: How Victorian Geologists Discovered the Secret of Life”