Whether you are a parent, a teacher, or in some other capacity given responsibility over the education or raising of children, there is a lesson to be learned from the naturalist Charles Darwin (February 12, 1809 – April 19, 1882).

From a 2009 issue of Natural History

Darwin was a devoted father, and in certain ways his attachment to his children was uncharacteristic for the Victorian period. Darwin and Emma married in 1842 and had ten children, seven of whom survived into adulthood. His own poor health meant that he did most of his scientific work from his home Down House: reading, observing, experimenting, corresponding, and writing. Thus, his family life and his scientific work intertwined throughout each day, and when his children were sick – which was quite often – his work would be delayed. But he also sought his children’s help, whether physically in experiments or for tossing thoughts back and forth. He included his children in the development of his ideas, and even thought of his children as scientific subjects themselves.

In the woods with Darwin (Paul Bettany) and some of his children, in a scene from the 2009 film Creation

The lack of original posts on this blog over the last couple of years is due to my raising my own children. As a parent, I appreciate the Darwin that allowed his children to pursue their interests, that introduced his children to nature and scientific subjects, and that sought to understand his own children biologically. 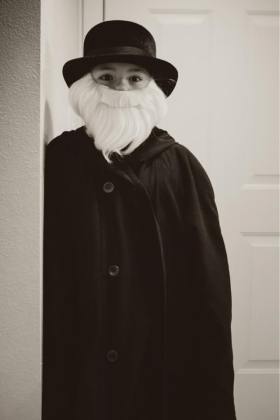 My son as Charles Darwin in 2017. Photo: Sammy Prugsamatz

Darwin biographer and historian James Moore referred to Down House, its grounds, and the “menagerie” of animals there as “a childhood paradise – an adventure playground, summer camp, and petting farm all rolled into one.” Darwin surely saw the value in exposing his children to nature at home and at places nearby, especially Orchis Bank (now “Downe Bank”), the patch of land that inspired the words about “an entangled bank” in his conclusion to On the Origin of Species (1859).

My children exploring at a local natural area in Portland, OR, here looking minuscule among the trees

I strive to both teach my children about evolution and to ensure their childhoods are full of plenty of time in nature. With constant challenges to evolution education in public schools and the always present yet increasing threats to the environment, there is no more important time than now to instill in our children a love for science and reason, and an appreciation for the natural world we depend on as a species. For us, and every living thing we share this planet with. Charles Darwin cared for his own family while learning about and sharing with the rest of the world about his larger family – the tree of life. We should allow our children to climb the tree of life, both metaphorically in learning about evolution and biodiversity, and in the real world through nature play.

My daughter climbing a tree in Portland, OR

In an 1852 letter to his cousin William Darwin Fox, Darwin wrote, reflecting on his duties as a father regarding their educations and whether or not they were to inherit his health problems, “How paramount the future is to the present, when one is surrounded by children.” Our future depends on having citizens that are well-informed in science and that have reasons to vote in favor of the environment. So, let us celebrate Darwin Day – and every day – by taking our kids outside and teaching them about evolution. 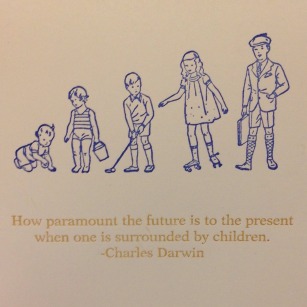 Jim Endersby: “Sympathetic science: Charles Darwin, Joseph Hooker, and the passions of Victorian naturalists,” in the journal Victorian Studies. Endersby discusses Darwin’s role as a father in relation to his botanical work.

James T. Costa: Darwin’s Backyard: How Small Experiments Led to a Big Theory, from W.W. Norton (Amazon). This book recounts Darwin’s many experiments and shows how involved his children were; also, each chapter includes activity instructions for educators.

The Bug Chicks blog: a guest post I wrote a few years back about Darwin, nature education, and parenting.

Kristan Lawson: Darwin and Evolution for Kids: His Life and Ideas with 21 Activities, from Chicago Review Press (Amazon)

Deborah Hopkinson: The Humbleebee Hunter: Inspired by the Life and Experiments of Charles Darwin and His Children, from Hyperion (Amazon). One of my personal favorite books about Darwin, or in this case, his children. My post about this book from 2012 is here. 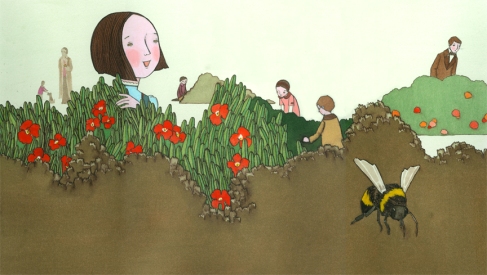 Art by Jen Corace from Deborah Hopkinson’s The Humblebee Hunter