Here are two new books centered on evolution and the human species that readers here may be interested in:

Philip Lieberman, The Theory that Changed Everything: “On the Origin of Species” as a Work in Progress (New York: Columbia University Press, 2017), 232 pp.

Publisher’s description Few people have done as much to change how we view the world as Charles Darwin. Yet On the Origin of Species is more cited than read, and parts of it are even considered outdated. In some ways, it has been consigned to the nineteenth century. In The Theory That Changed Everything, the renowned cognitive scientist Philip Lieberman demonstrates that there is no better guide to the world’s living—and still evolving—things than Darwin and that the phenomena he observed are still being explored at the frontiers of science. In an exploration that ranges from Darwin’s transformative trip aboard the Beagle to Lieberman’s own sojourns in the remotest regions of the Himalayas, this book relates fresh, contemporary findings to the major concepts of Darwinian theory, which transcends natural selection. Drawing on his own research into the evolution of human linguistic and cognitive abilities, Lieberman explains the paths that adapted human anatomy to language. He demystifies the role of recently identified transcriptional and epigenetic factors encoded in DNA, explaining how nineteenth-century Swedish famines alternating with years of plenty caused survivors’ grandchildren to die many years short of their life expectancy. Lieberman is equally at home decoding supermarket shelves and climbing with the Sherpas as he discusses how natural selection explains features from lactose tolerance to ease of breathing at Himalayan altitudes. With conversational clarity and memorable examples, Lieberman relates the insights that led to groundbreaking discoveries in both Darwin’s time and our own while asking provocative questions about what Darwin would have made of controversial issues today, such as GMOs, endangered species, and the God question.

This book is reviewed, along with three other new titles about Darwin, in the Times Literary Supplement, and the author of said review discusses it for the TLS podcast.  And a so-so review from Publisher’s Weekly. 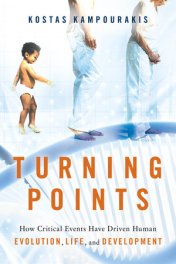 Publisher’s description Critical historical events–or “turning points”–have shaped evolution and continue to have a decisive effect on individual lives. This theme is explored and explained in this lucid, accessible book for lay readers. The author argues that, although evolution is the result of unpredictable events, these events have profound influences on subsequent developments. Life is thus a continuous interplay between unforeseeable events and their decisive consequences. As one example, the author cites the fusing of two chromosomes, which differentiated the human species from our closest animal relatives about 4 to 5 million years ago. This event was not predictable, but it had a profound effect on the evolution of our species thereafter. By the same token, certain unpredictable circumstances in the past enabled only Homo sapiens to survive to the present day, though we now know that other human-like species also once existed. The author contrasts such scientific concepts grounded in solid evidence with prevalent misconceptions about life: specifically, the religious notion that there is a plan and purpose behind life, the widespread perception that intelligent design governs the workings of nature, the persistent belief in destiny and fate, and the attribution of an overly deterministic role to genes. This excellent introduction for laypersons to core ideas in biology goes a long way toward dispelling such misconceptions and presents current scientific research in clearly understandable, jargon-free terms.

Again, this book is reviewed in Publisher’s Weekly.