Biologist James T. Costa has recently published two books about Alfred Russel Wallace (he previously edited The Annotated Origin: A Facsimile of the First Edition of On the Origin of Species in 2011).

A giant of the discipline of biogeography and co-discoverer of natural selection, Alfred Russel Wallace was the most famous naturalist in the world when he died in 1913. To mark the centennial of Wallace’s death, James Costa offers an elegant edition of the “Species Notebook” of 1855-1859, which Wallace kept during his legendary expedition in peninsular Malaysia, Indonesia, and western New Guinea. Presented in facsimile with text transcription and annotations, this never-before-published document provides a new window into the travels, personal trials, and scientific genius of the co-discoverer of natural selection.

In one section, headed “Note for Organic Law of Change”–an extended critique of geologist Charles Lyell’s anti-evolutionary arguments–Wallace sketches a book he would never write, owing to the unexpected events of 1858. In that year he sent to Charles Darwin an essay announcing his discovery of the mechanism for species change: natural selection. Darwin’s friends Lyell and the botanist Joseph Hooker proposed a “delicate arrangement”: a joint reading at the Linnean Society of his essay with Darwin’s earlier private writings on the subject. Darwin would publish On the Origin of Species in 1859, to much acclaim; pre-empted, Wallace’s first book on evolution waited two decades, but by then he had abandoned his original concept.

On the Organic Law of Change realizes in spirit the project Wallace left unfinished, and asserts his stature as not only a founder of biogeography and the preeminent tropical biologist of his day but as Darwin’s equal among the pioneers of evolution. 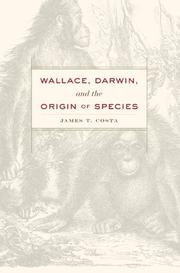 Charles Darwin is often credited with discovering evolution through natural selection, but the idea was not his alone. The naturalist Alfred Russel Wallace, working independently, saw the same process at work in the natural world and elaborated much the same theory. Their important scientific contributions made both men famous in their lifetimes, but Wallace slipped into obscurity after his death, while Darwin’s renown grew. Dispelling the misperceptions that continue to paint Wallace as a secondary figure, James Costa reveals the two naturalists as true equals in advancing one of the greatest scientific discoveries of all time.

Analyzing Wallace’s “Species Notebook,” Costa shows how Wallace’s methods and thought processes paralleled Darwin’s, yet inspired insights uniquely his own. Kept during his Southeast Asian expeditions of the 1850s, the notebook is a window into Wallace’s early evolutionary ideas. It records his evidence-gathering, critiques of anti-evolutionary arguments, and plans for a book on “transmutation.” Most important, it demonstrates conclusively that natural selection was not some idea Wallace stumbled upon, as is sometimes assumed, but was the culmination of a decade-long quest to solve the mystery of the origin of species.

Wallace, Darwin, and the Origin of Species also reexamines the pivotal episode in 1858 when Wallace sent Darwin a manuscript announcing his discovery of natural selection, prompting a joint public reading of the two men’s papers on the subject. Costa’s analysis of the “Species Notebook” shines a new light on these readings, further illuminating the independent nature of Wallace’s discoveries.