UPDATE (6/11/13): I was informed by a friend that the Discovery Institute’s Casey Luskin, coauthor of the book I discuss in this post, responded to my critique, in Critics of Discovering Intelligent Design Ignore the Textbook’s Text. I will respond to his claims within the body of my post, in bold.

One would perhaps think that after being shown on multiple occasions that a quote they decided to cherry pick from a historical figure’s work in fact does not convey what they want that figure to have said in the past, said cherry picker would decide to stop using that quote in a vain attempt to discredit that historical figure. The tactic of quote-mining Charles Darwin is something I’ve posted a lot about before, and it continues to astound me that creationists – no, sorry, intelligent design advocates – no, wait, yes, creationists – time and time again slap history in its face. But that’s how creationists work: they say something they think supports their view, and will never reconsider even in the face of evidence against it.

Taking Darwin’s words out of context was the purview of young earth creationists. The tactic is now practiced increasingly by intelligent design creationists, especially those at the Discovery Institute. They have a new book that just came out, Discovering Intelligent Design: A Journey into the Scientific Evidence, a sort of textbook for intelligent design. On Amazon, you can view some of the contents, and I found myself doing so a few days ago. The index showed several entries for Darwin, and while not all of them were viewable, two that were use quotes from the naturalist.

On page 27, one will find atop the page this quote: “A fair result can be obtained only by fully stating and balancing the facts and arguments on both sides of each question.” This quote comes from On the Origin of Species, and I’ve shown several times why it is erroneous to use it the way they do. The Discovery Institute uses this quote to get people to think that the subjects of evolution and intelligent design should be taken up equally, and that Darwin would have supported that. Darwin is not stating that all sides are equal concerning debate over evolution, but rather that he cannot properly offer all the facts he has in support of evolution in On the Origin of Species, which was much shorter than the book he really wanted to write (he was, as you probably know, pushed to publish sooner when he received a letter from Alfred Russel Wallace outlining the same idea about natural selection). Context matters, and it surely does with this quote.

Luskin writes, “There’s one other accusation of ‘quote-mining’ by ‘The Dispersal of Darwin’ — but it’s so weak and bizarre as to be hardly worth mentioning. He charges that when we quote Darwin’s statement, ‘A fair result can be obtained only by fully stating and balancing the facts and arguments on both sides of each question,’ despite all appearances to the contrary, that’s not what Darwin really meant.” Luskin thinks that Darwin asking his readers in the mid-nineteenth century to understand that he was not able to include all his facts in On the Origin of Species (he did plan on publishing a fuller account later, but that did not happen) equates to Darwin hypothetically advocating for equal treatment of intelligent design “theory” today is erronous. Darwin was not referring to both sides as being evolution versus special creation. As it was pretty clear to Darwin that explaining the diversity and distribution of life on earth through special creation was not viable, his “both sides” was in reference to the how of evolution, the mechanism. And for him, it was natural selection, and he argued for it in Origin. Others agree that the Discovery Institute’s use of this Darwin quote in order to advocate for intelligent design is misguided. See “Misguided Missal” from John Pieret, “Obtaining a fair result” from historian of science John Lynch, and “Nope, Still A Quote Mine” by Jeremy Mohn.

On page 95, when discussing mutation, the authors throw out this quote from Darwin, also from On the Origin of Species: “If it could be demonstrated that any complex organ existed, which could not possibly have been formed by numerous, successive, slight modifications, my theory would absolutely break down.” How convenient for them to not include Darwin’s next sentence: “But I can find out no such case.”

Luskin claims that they “quoted Darwin correctly” here, and that I failed to note that they did share Darwin’s next sentence. “Evidently, the critic hasn’t read Discovery Intelligent Design carefully,” Luskin writes. He ignores the fact that immediately after quoting that passage from Origin of Species, Discovering Intelligent Design explicitly notes that Darwin said he could find no such case.” I guess I missed the continuation of the quote when I looked at that page on the Amazon preview. Here is that page: 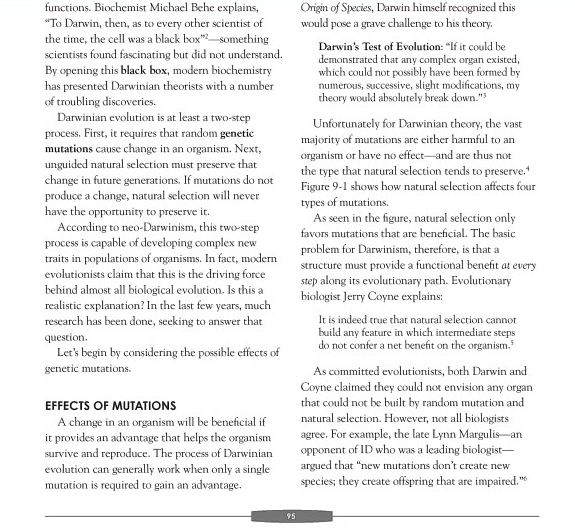 I wonder why Luskin claims that they immediately noted that Darwin could find no such case. Following the quote, two paragraphs ensue before they state “As committed evolutionists, both Darwin and Coyne claimed they could not envision any organ that could not be built by random mutation and natural selection.” Why do they not include Darwin’s own words “But I can find out no such case” with the rest of the quote? Because, by leaving it out and separating the clarifying statement until further down on the page, creates for the reader, Luskin is surely well aware, doubt in Darwin’s mind. Ending the quote with “my theory would absolutely break down” does more to cast negativity toward evolution than to provide the full quote. Yes, they provide Darwin’s clarification later, but it won’t correct the impact that “my theory would absolutely break down” will have on young minds who are from the beginning encouraged to doubt Darwin. This is misquoting Darwin, Luskin. You intentionally left out Darwin’s own words in order to make it seem that he doubts his own ideas.

If I were to see a copy of the book in person, I wonder how many more quote-mines I would find. It’s no wonder that some have dubbed the Discovery Institute the Dishonesty Institute. To all who love history and appreciate the accurate portrayal of historical figures, I apologize that there are organizations out there who think they are doing credible science and credible history.

Finally, while I am said to have ignored the text, Luskin apparently could not figure out who I am, as to him I am an “anonymous critic.” My identity is there, clear as day on my “about” page and in the link to my Twitter page. I am not trying to hide who I am. And I allow comments on my blog, unlike at Evolution News & Views.

NOTE: Larry Moran at Sandwalk has already taken the authors to task for how they define evolution in the book, here. And a little more about the book from The Sensuous Curmudgeon, here.