Once in Cambridge, I found my room in Downing College and took a shower. That was necessary.

I decided then to just walk around, to familiarize myself with the area. Here are some shots from that walk:

The Eagle Pub is famed for being the place where geneticists James Watson and Francis Crick announced that they had discovered the secret of life (determined the structure of DNA):

Walking around I kept my eyes open for places with free wireless access, but couldn’t find any besides a McDonald’s near an outdoor market.

Karen James (of NHM and The HMS Beagle Project), who was in Cambridge for the entirety of the Darwin Festival (listen to a podcast about her, mine, and Richard Carter’s time at the festival), met me at McDonald’s (we did not eat there), and we embarked to see a few sites around the university. It was a pleasure to meet Karen, having been online friends for a while now – in fact, this was just my second time meeting a fellow science blogger (the first was Anne-Marie while at UNCW back in March).

First up, Christ’s College, where Darwin attended. His room has been restored (the room was closed, but I saw it another day, photos in a later post) and the grounds of the college is now home to a Darwin garden, centered ’round a stunning sculpture of a young Darwin by Anthony Smith:

I really liked the attention to detail in the sculpture (mainly titles on the books – Herschel, Paley, Humboldt) and the addition of a beetle:

An inordinate fondness for beetles

Christ’s College boasts a variety of all things bearded-Darwin: a plaque at the porter’s lodge entrance, a stained glass window, and an 1883 copy of an 1875 portrait Walter William Ouless:

After Christ’s, Karen and I walked through King’s College (we bumped into Daniel Dennett!) and over the River Cam:

with Daniel Dennett (notice the Darwin fish pin on his jacket!)

After lunch for Karen and coffee for me, we went our own ways. I walked around a bit more, then headed back to room to start making sure I was ready to present my paper at the conference. 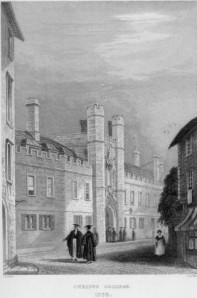 Engraving of Christ's College, by J. Le Keux after I. A. Bell. Published April 1838.

Later I went to see Re:Design at the ADC Theatre, the play commissioned by the Darwin Correspondence Project about the exchanges between Darwin and Asa Gray. Wonderful play, wonderful acting. Dennett was sitting behind me. You can view a performance of it from 2008 here.

Stage for Re:Design at the ADC Theatre, University of Cambridge

That all made for a very long day (even if I hadn’t flown all the previous day). It was time for sleep. I needed to be awake for the first day of the conference on Saturday. And like Karen said in the podcast, this visit was like Darwin Mecca for me. Friday’s tour through Cambridge barely scratched the surface for all the Darwin it had to offer.

You can view all the photos from my trip here, if you feel so inclined.