As we have celebrated the legacy of Charles Darwin’s life and work this past week, I find it important to share an important discovery made by Darwin scholars. Small scraps of paper found inserted into several pages of Darwin’s Beagle Diary, apparently having been removed and lost, have resurfaced in an archive. Eight scraps in all and placed in an envelope, each one contains a written “clue,” such as “Every living organism is unique. Individuals vary, even within the same species.” Even more exciting is a note from Darwin in the same envelope: “These clues to the mystery of mysteries were given me by Rosie, a friend who accompanied me on the voyage of the Beagle.” As much as we credit Darwin for the theory of evolution by natural selection, developed over decades through keen observation, tedious studies, and curious experiments, it appears that Darwin received much insipiration for his ideas from someone else. And of all people, or creatures, rather, this someone else was a beetle! Rosie was a rose chaffer beetle, and Darwin was very fond of her.

Of course, everything I’ve written here so far is nonsense – if you think I am telling you something about the real world. But what about a children’s book? 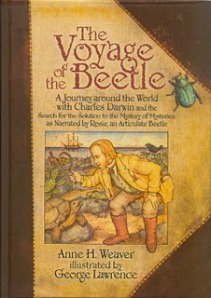 The Voyage of the Beetle by Anne Weaver

There are numerous books about Darwin for children, many revolving around the voyage of the Beagle. Unfortunately I have not read any of them, nor was I aware of Darwin when I was a child (I read my first book about Darwin as a senior in high school – in 1996). I have seen other children’s books about Darwin over the last few years, however, and I am going to make a leap here and say that The Voyage of the Beetle: A Journey around the World with Charles Darwin and the Search for the Solution to the Mystery of Mysteries, as Narrated by Rosie, an Articulate Beetle (1), by Anne Weaver and illustrated by George Lawrence, is one of the most attractive and effective in teaching about natural selection. Concise (and not long-winded as is the title), and wonderfully illustrated and formatted, The Voyage of the Beetle was a delight to read – and I am glad to have it on my shelf for when my son is older.

What I really enjoyed about this telling of Darwin’s life is the attention to detail that Weaver, an anthropologist, employs while fashioning a fanciful tale about Darwin’s thought process concerning “that mystery of mysteries” – the mutability of species. When Darwin first meets Rosie under a rock, he was on his way to see Professor Henslow, Darwin’s mentor at Cambridge University and influential in Darwin’s getting the chance to sail on H.M.S. Beagle. Rosie prefers to call Darwin “Charles,” rather than the nickname of “Gas” he received because of his interest in chemical experiments as a teenager (2).

We learn about Darwin’s initial plans to be in the clergy so he could devote time to “follow his true passion: the investigation of the natural world.” We learn that Darwin was not only an adventurer in the traditional sense, but also an adventurer in the world of ideas – “He had a rare gift for looking at old facts in a new way.” Rosie forwarns Darwin of placing a beetle in his mouth so as not to lose another, more intriguing beetle. Briefly mentioned are Darwin’s cramped quarters on the ship and his seasickness during the voyage, images of slavery in Brazil and gauchos in Argentina, an earthquake in Chile and reading Lyell’s Principles of Geology, airborne marine iguanas of the Galapagos and kiwis in New Zealand, and ornithologist John Gould and cousin Emma Wedgwood. Weaver does an excellent job of incorporating what Darwin wrote in the diary he kept while on the voyage and his 1839 book, Journal of Researches into the Geology and Natural History of the Countries visited during the Voyage of H.M.S. Beagle round the World, under the Command of Capt. Fitzroy, R.N. (later The Voyage of the Beagle), as well as small details of Darwin’s life, such as his encounter with a slave in Rio de Janeiro. Most anecdotes are less serious. In his diary entry for January 14/15, 1832, Darwin writes:

Some few birds have been hovering about the vessel 59 & a large gay coloured cricket found an insecure resting place within the reach of my fly-nippers. — He must at the least have flown 370 miles from the coast of Africa.

In The Voyage of the Beetle, this cricket has a name (as do other insects we meet):

I [Rosie] found myself wandering about the ship in search of more cheerful companionship. This I found in a fellow adventurer, a brightly colored cricket named Motley. Motley had been blown almost 400 miles from Africa and has stopped to rest in the Beagle’s rigging.

All along their observations and adventures, Darwin consistently asks questions about the life and landscapes encountered in South America, New Zealand, Australia, and several oceanic islands. On examining microscopic organisms in water netted from the sea, he asks, “How could such beauty be created where no one can see it?” About sea slugs in Patagonia, Darwin asks, “But what if just a few were able to hide because they were quicker at squirting ink, or because their coloring matched the rocks or kelp where they live?” And on kiwis in New Zealand, “What if all birds started out with similar wings, but in each different environment, a wing form that was slightly more useful, perhaps because of stronger chest muscles, or a sleeker shape, was passed on for generation after generation?” Following each instance of Darwin’s curiosity about the nature of species, Rosie slips into his diary a clue to help him discover the solution to “that mystery of mysteries.” Darwin’s conversations with Rosie reflect, Weaver writes, his thought process that led him eventually to the idea of natural selection.

The Voyage of the Beetle works well as an entertaining adventure story, a charming biography of the young Darwin, and an educational book about natural selection and evolution (the book states it is for grades 4 and up). The clues provided by Rosie are not just for Darwin to consider, but for the reader to also try and figure out the solution through inductive reasoning, as Rosie says, “before Darwin does.” The illustrations by George Lawrence are very nice, and as “an admirer of Charles Darwin and his theories for many years,” Weaver’s approach to this book is fresh and clever, and most importantly, accurate. There is no eureka moment on the Galapagos – Darwin does not see different species of finches and exclaim, “Aha, evolution!” Nor is there the sense that Darwin set out on the voyage to prove evolution (3).

There is even a hint in the book of Darwin’s admiration for William Paley and his work Natural Theology; to Rosie, “isn’t it astonishing how every kind, or species, of creature fits into its environment as if it were designed for it?” His observations and questions about the nature of species ultimately led to his profound conclusions, presented in his 1859 abstract (of a planned larger work!), On the Origin of Species (and not The Origin of Species). And Darwin did not avoid publishing his work because of fear from religious circles or upsetting his wife, but because, as Weaver writes in a concluding chapter, he needed to “be sure enough of his solution to share it publicly,” as historian John van Wyhewould agree (this view may be presented in The Voyage of the Beetle, however, to avoid religious matters in a children’s science book).

I hope this book finds itself on library shelves, and possibly even as an important tool for teaching kids about evolution and natural selection as we approach the bicententenary of Darwin’s birth and the 150th anniversary of the publication of On the Origin of Species in 2009.

1. Anne Weaver, The Voyage of the Beetle: A Journey around the World with Charles Darwin and the Search for the Solution to the Mystery of Mysteries, as Narrated by Rosie, an Articulate Beetle (Albuquerque: University of New Mexico Press, 2007 [copyright 2004]).

3. I particularly like this summary from historian of science Peter J. Bowler: “The scholars of the ‘Darwin industry’ have been forced to battle against the mythological character acquired by the voyage in order to reconstruct the true story. Many aspects of the traditional legend have not been substantiated by the most recent scholarship. Thanks to the work of Frank Sulloway, we now know that Darwin did not recognize the significance of the Galapagos finches until after the Beagle had departed. He had to use other people’s collections in order to investigate the problem of speciation in this unique environment. More generally, the Darwin scholars have shown that we need to reinterpret our whole picture of what he was up to during the five years he was away. The voyage is traditionally interpreted with the benefit of hindsight: we know what use Darwin eventually made of his discoveries and we allow this to influence our evaluation of what he actually did. Once again, Darwin himself contributed to the problem by rewriting the later and more popular edition of the Journal of Researches to incorporate the fruits of his own reflections on the voyage’s significance. HIstorians now argue that we must force ourselves to accept that his conversion to evolutionism came after his return to England. If we want to understand what Darwin was actually doing while circumnavigating the globe, we must look to the notebooks and letters written at the time – which reflect a very different set of interests to those imposed by hindsight” [in Bowler, Charles Darwin: The Man and His Influence (New York: Cambridge UP, 1990), pp. 49-51].

NOTE: I have to thank Dr. Weaver for having her publisher send me a copy ofThe Voyage of the Beetle for review. There is a companion website for the book, and it has been briefly reviewed at John Hawk’s Anthropology Weblog. There are a few reviews on the book’sAmazon page as well. All illustrations in this review are fromThe Voyage of the Beetle.

9 thoughts on “The Voyage of the… Beetle?”